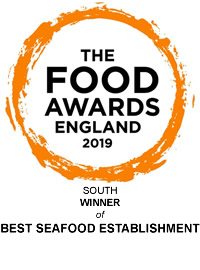 Seabeats is a family run Seafood Restaurant its owner and head chef is Adam Foster who was born in Weymouth and studied at Weymouth College.

His first position was at the well renowned Mallams Restaurant on the harbour where Adam continued his learning experience under their Head chef.

He moved from there to The Roundhouse where he held his first Head chef appointment, following that he travelled abroad gaining experience in French and Spanish cuisine.

On his return Adam was appointed the Head Chef at the Crab House Cafe where he held the position for 9 years. In that time they were awarded one Rosette and also awarded Best Seafood Restaurant in England at the English Food Awards.